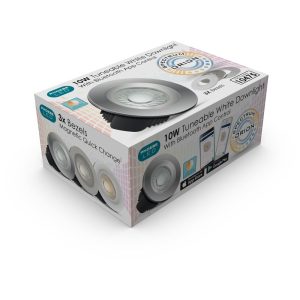 The Phoebe LED Spectrum downlight is supplied with 3 bezels that feature a magnetic fastener for quick removal or change.

Stylised in white, chrome and brushed aluminium, they simply pull away from the fitting giving the user the ability to change the look of the downlight with minimum effort.

The spotlight has a beam angle of 40° and is tuneable from 2200K extra warm white all the way through to 6500K daylight.

It can also be fully dimmed from the smartphone control app, which can be downloaded from Google Play for Android devices, or App Store for Apple iPhones.

The app gives full control of the all the Spectrum downlight features and includes the ability to set-up multiple smartphone devices for multi-user control.

It allows control all the Spectrum downlights in a building by allowing the user to add lights into groups (i.e.living room, bedroom) – or the group feature can be used to control specific lights in a room and create multi-colour displays.

The app also features the ability to set-up events to automatically turn on/off, colour change, or dim lights according to a time/day schedule.